Party in the Park Called a Huge Success

Toni Atkins at our special August 5 meeting. The Speaker will cover a wide range of topics including a legislative update and how San Diegans can and will be affected by the new state budget. And a new California Law sponsored by Speaker Atkins mandating that Residential Care Facilities carry liability insurance will get special attention.

The Wednesday night meeting will start with social time at 6:30 PM and the talking gets underway at 7 PM. LMFDC represents the communities of Allied Gardens, Del Cerro, San Carlos, La Mesa, Mt. Helix, Santee, College area and other close in East County towns. We meet at the La Mesa Community Center at 4975 Memorial Dr. just North of University Avenue.

Assembly Speaker Toni G. Atkins has served in the California State Assembly since 2010, and was elevated to the top leadership post in 2014, when her colleagues unanimously elected her 69th Speaker of the California Assembly. Speaker Atkins proudly represents the people of coastal San Diego, from Imperial Beach, north to Solana Beach, and most of central San Diego. She previously served eight years on the San Diego City Council, and became a stabilizing force during a tumultuous period in 2005, stepping in as Acting Mayor after the resignation of the mayor.

Speaker Atkins is a coalition-builder who believes government policies can improve people’s lives. She is a leading voice for affordable housing, a powerful advocate for women, and champion for veterans and homeless people. Prior to her election as Speaker, she held the position of Majority Leader. She chaired the Assembly Select Committee on Homelessness, and served on committees on Agriculture, Housing and Community Development, Health, Judiciary, Veterans Affairs, Select Committee on Ports, Select Committee on Biotechnology as well as the Joint Legislative Audit Committee.

Her life of public service began in San Diego in the mid-1980s as director of clinic services at Womancare Health Center. She became a staff representative of then-City Councilmember Christine Kehoe, later winning her mentor’s council seat after Ms. Kehoe’s election to the Assembly. She represented the City of San Diego in the local chapter of the League of California Cities; on the board of the Metropolitan Transit System; on the San Diego Association of Governments; the Regional Housing Working Group; and the San Diego River Conservancy.

This meeting will be unique not just because we’ll have the first Assembly Speaker ever from San Diego, but we’ll also get a civics lesson in politics and policy at work. Not long after the publication of a series of disclosures about elder abuses in residential care facilities (also called assisted living homes), it was revealed that over 85% of these homes lacked basic liability insurance despite caring for frail, dependent seniors. Therefore, in the case of neglect, abuse, injury or death, there was little judicial recourse for residents or their families. Speaker Atkins took up the cause and put forward Assembly Bill 1523. It was passed in a non partisan vote and signed into law by Governor Brown. It went into effect on July 1st of this year. Now all RCFEs (Residential Care Facilities for the Elderly) will be required to carry liability insurance in California. 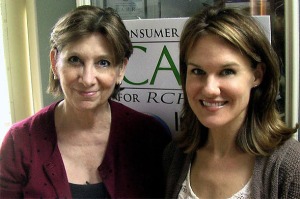 The driving force behind this legislation was a small advocacy group named CARR, Consumer Advocates for RCFE Reform. The 2 founders of this Award Winning organization are Chris Murphy and Christina Selder. Ms. Selder will be sharing their story with our members in a follow up to Speaker Atkins address. How exactly do 2 women with investigative and research experience convince the Speaker of the Assembly to carry a bill to protect seniors from unscrupulous care providers? It’s a great story and a lesson in good timing and a just cause.

Christina (Chrisy) Selder holds a Master of Science degree in Gerontology from San Diego State University, and a Bachelor of Science degree in Economics/International Trade and Finance from Louisiana State University. She has previously held an RCFE Administrator’s Certificate, earned an SDSU Grant Writing Certification and completed components of UCSD’s Paralegal Training to be of further benefit to CARR’s mission and work. Her scholarship and credentials are augmented by her hands-on employment experiences inside several RCFEs.

CARR recently won a $50,000 contract with the County of San Diego, Aging & Independence Services for a pilot project to create a rating system for the County’s assisted living facilities, and to develop a consumer-friendly website to display the ratings and facility information. CARR was also the recipient of the First Amendment Coalition’s Free Speech and Open Government Award for their work, making CARR the first non-profit to receive this honor.

Despite a little rain, our 2nd Annual Party in the Park turned out to be a real success. Over 130 attendees saw a moving tribute to retiring City Councilperson Marti Emerald, heard Todd Gloria and Scott Peters each speak eloquently to a rapt audience, and enjoyed Park Naturalist Linda Hassakis give an entertaining and educational presentation about Mission Trails Regional Park. Our great thanks to Jay Wilson and the entire staff at the Visitors Center, and to Cheers Deli for supplying some great sub sandwiches. Our silent auction raised over $700 and we signed up 16 new members. Lastly, we heard enthusiastic pitches from several of our Democratic hopefuls for City office and hope they’ll all return for our Candidates Forum in September.

Please find photos and more information for all our LMFDC events and meetings at www.lamesafoothillsdemocraticclub.com and please like us on Facebook.