Larry Howe is the Past President who now lives in Italy with his wife Arlene. 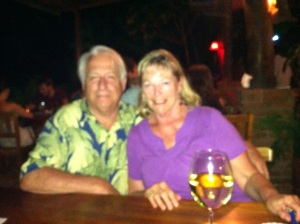 As a nation, we are being confronted with the unthinkable reality that a foreign power intentionally injected influence into an election for the Office of the President of the United States. Compounding that issue is the concern as to whether the candidate who won that election knowingly collaborated with a foreign power in that effort or whether that candidate became an unwitting beneficiary.

A third more complex and realistic probability is that Donald Trump became compromised through the exploitation of his own entrepreneurial greed in his business dealings with that foreign power. Then comes the issue of what the result of that compromise might have entailed. The resolution of these critical issues is made more difficult by the seeming unwillingness and incapacity of the Trump enterprise to entertain serious reflection on the consequences of their actions. Self-aggrandizement appears to be the only overarching consideration they can consider.

A proposition could be made that the easiest people to con are greedy opportunists. The exploitation of an opponent’s own weaknesses for use against them is a well-established strategy.  It is beginning to look like the Russians have a gift of a predatory instinct that enables them to spot easy marks to prey upon. And the Russians have used it well against the United States in the undermining of the political process.

But to what end? In a strategic contest between major world powers, any success in creating instability within the governing structure of a potential adversary works to the benefit of the orchestrator of the instability.  It would be a mistake to underestimate the residual animosity that exists within Russia over the perceived role of the U.S. in encouraging the fall of the Soviet form of government. The U.S. arming and encouraging the Afghani resistance brought the already existing deficits of the Soviet government into sharper focus. And then following the collapse of the Soviet Union, the heavy-handed approach to Russian economic reform taken by the U.S. administration under Ronald Reagan was taken as an attempt to further weaken Russia and ensure U.S. dominance. That was followed by a significant enlargement of NATO incorporating former countries of the Warsaw Pact which Russia saw as a buffer between it and a hostile west. To understand this larger dynamic is to better understand the underlying lingering animosity that orchestrates the Russian well played strategy against the interests of the U.S.

Emerging evidence demonstrates the carefully executed strategy employed by the Russians to undermine the confidence of the American population in their governmental processes.  To be sure, the Russians recognized the reality that the American political process had already sown the seeds of its own collapse.  The fomenting of extreme political division changed politics from an arena for open debate and collaboration toward the best solutions for the common good to a ‘zero sum – winner takes all’ power contest.  Extremism in various quarters has become the dominant reality in American politics over the past thirty to forty years. And those divisions have only fed on each other resulting in the virtual breakdown of informed, collaborative political dialogue.

The Russians did not initiate that process in America, we did it to ourselves. But that breakdown in effective political process created the tempting opportunity for the injection of ‘active measures’ to exacerbate the growing crisis of governance in the U.S.

The growing extremism within the Republican Party fed on the manipulation of legitimate discontent and disappointment of large segments of the U.S. population. Many Americans recognized their government was complicit in the conditions that permitted big money interests to take unreasonable speculative risks and to engineer a cornucopia of bizarre mechanisms to lure the unsuspecting into bogus ‘get-rich-quick schemes’ (i.e. The Derivatives Market).  The outcome was world-wide economic disruption and the loss of significant life savings by so many of us. Added to that, was the further failure of the government to take meaningful, corrective action. Small wonder there is a rampant level of cynicism toward government in the U.S.

Populism is one of the easiest movements to coopt. The successful demagogue is the one who listens to the anxieties in the population and plays them back to the masses in seeming affirmation and personal identification with their distress. In conditions like that, most people want to feel listened to, “Thank you for understanding I am pissed-off!” The aggrieved are in an elevated emotional state and have neither the inclination nor are they necessarily equipped to evaluate complex issues of economic structural reform necessary to correct the problems. Too often, affirmation of distress is sufficient to get a following. Sound bites, slogans and political stunts carry the day.

The Republican Presidential Primary illustrated a mad rush to court the Populism sentiment with candidates each trying to appear more ‘anti-establishment’ than the next. Enter Donald Trump. This seventy-year old entrepreneur has existed by sniffing out opportunities to be exploited for his own personal gain. He instinctively gravitates toward market dynamics built on exposure.  Publicity is the meat of entrepreneurial opportunity. Looking for exposure, why not a presidential campaign stage?

If you were looking for someone to back to be President of the United States who would be the least effective person to have in office and further promote discontent with democracy, from that field, who would you have chosen?  If you wanted to undermine the candidacy of the person with the best experience and best insights into your self-serving objectives, which of the potential candidates would you have wished to undermine?

It remains to be seen and may never be sufficiently clear the extent to which the Trump campaign knowingly collaborated with Russian efforts to undermine the 2016 presidential election process. Elements of the Trump entourage were courted and enticed into what appeared to be promising commercial opportunities. The reality that they could be compromised in a political context would first have be recognized if they were even open to recognizing it.  A vulnerability of an entrepreneur can be the delusion you are conning the other party more effectively than they are conning you.  Trump was good at it in dealing with contractors working on his properties but dealing with the Russian state apparatus might have injected him into a contest even beyond his guile.

There is an impression Donald Trump has embedded into our awareness that he is a man seemingly incapable of dealing with his own fallibility.  His inability to control his emotional reflexes and impulses is an extremely worrisome component in a president’s emotional profile. The responsibilities of the President of the United States require a person of calm disposition ready to see world affairs as extremely complex and nuanced. The individual must be able to control impetuosity and must gather around them people with broad depth and perspective who are encouraged to speak truth rather than acting as sycophants.

Donald Trump is immersed in a swamp of his own creation and is flailing about using elements of the government to attempt to cover and justify his serious errors in judgement revealed in his impetuous pronouncements.   In a recent case in point, whether wittingly or not, to further his own ends he has deliberately weakened the credibility the investigation being conducted by the House Intelligence Committee. By compromising Committee Chair, Devin Nunes, he has cast doubt on the capability of the House of Representatives to impartially protect the interests of the American people.  The Russians could not have done a better job of undermining faith in elements of American democracy.

On its face, in accomplishing that outcome, Donald Trump has furthered Russian interests. To give him the benefit of doubt, it is likely his own personality deficits are more responsible for that outcome than any orchestration by a hands-on Russian effort.

And so, it appears in the entire Trump debacle, the personality deficits of Donald Trump have been ready made to be manipulated by a foreign power to their benefit.  Cynicism is growing and distrust of American core governmental functions is being eroded on an almost daily basis.

The resolution of this crisis is going to require the emergence of true statesmanship coming from some other quarter than the Office of the President. Donald Trump has demonstrated he lacks the depth of personal character to see beyond his own personal aggrandizement to the larger interests of the United States.  The likelihood of his resigning is a fantasy.  His potential removal by Congressional action will be drawn out and messy.  We are in for a very uncertain future in a very complex world. The Russians could not be more satisfied with their efforts in contributing to this outcome.

We have all been had.  We brought a lot of this on ourselves. Concentrations of financial power in the U.S. were part of the manipulative process that helped con many in the electorate. Narrow political opportunists who have sold out to those concentrations of financial power continue to do their bidding. We offered the Russians a wide-open opportunity to exploit our weaknesses and they took it.

If there was ever a time to break down political division and have voices of collaborative moderation take charge, it is now.  God protect and defend the United States of America from what we have done to ourselves!