Coming off a sensational clash at our January meeting between two progressive champions, State Senator Marty Block and Speaker of the Assembly Toni Atkins, each running for the 39th State Senatorial seat, the La Mesa-Foothills Democratic Club will be back at it in February with another outstanding set of debates and endorsement votes. Featured will be the 3 great Democratic candidates for San Diego City Attorney: Rafael Castellanos, Gil Cabrera, and Mara Elliot. All are lawyers with extensive and diverse backgrounds in public service.

Attendees will be equally pleased by an exchange between two enthusiastic Navy veterans running for the San Diego City Council District 7 seat: Jose Caballero and Justin DeCesare. Both debates will be followed by Club endorsement votes, with the first candidate to get 60% support earning the prestigious LMFDC stamp of approval. We’ll also be voting on an endorsement for the Citizens’ Plan for San Diego as presented in January by local powerhouse attorney Cory Briggs.

The La Mesa-Foothills Democratic Club, representing hundreds of like-minded progressives in La Mesa, San Carlos, Spring Valley, College, and many other nearby East County communities, meets the first Wednesday of each month at the La Mesa Community Center, 4975 Memorial Dr., at University Ave. in La Mesa. It’s just a couple minutes off the Spring Street exit of I-8.

Our agenda will begin at 6:30 PM with our ever popular social ½ hour, with snacks, sweets, camaraderie and beverages, followed by the formal meeting starting promptly at 7 PM. The City Attorney Debate will kick-off shortly thereafter, with the D7 forum following at approximately 8 PM.

Both debates will feature a series of questions on issues that concern all city and county residents. You can depend on some of the questions touching on the Briggs/Frye Citizens’ Plan measure, stadium/convention center funding, infrastructure and traffic concerns, the Chargers, growth and development, environmental issues, climate action plans, SANDAG planning, medical marijuana, and many other topics that concern our diverse membership.

The candidates for City Attorney

Rafael Castellanos received his college degree from Arizona State University and a law degree from the University of Chicago Law School. Eventually, he made his way to Los Angeles to practice law, then to San Diego where he found his calling, immersing himself in the law and in using the law to serve his community.

He is a Member of the Board of Commissioners of the Unified Port of San Diego having been appointed by the San Diego City Council. He Chairs the Port’s Environmental Advisory Committee. Among his many civic roles he has served on the Board of MANA de San Diego, the San Diego La Raza Lawyers Association, and Teach for America – San Diego. He has worked with the San Diego Foundation to address climate change preparation and has also worked tirelessly at the Port to address the issue of chronic homelessness on the waterfront.

Gil Cabrera was the first in his family to finish college (at California State University Fullerton) and the only person to go to graduate school (at Boston College School of Law). During his career, Gil has represented a broad spectrum of clients – from some of the largest companies in the country to small local businesses — as litigation counsel and outside General Counsel. In 2007, Gil started the Cabrera Firm, where he has continued to provide legal advice to small and growing companies as General Counsel.

For seven years, Gil served as an appointed Judge Pro Tem of the Superior Court, hearing hundreds of Small Claims and Traffic Court trials. In 1999, Gil joined the Make-A-Wish Foundation of San Diego board of directors and in 2002 was named chairman of the board. In 2003, Gil was appointed to the Make-A-Wish Foundation of America’s National Board of Directors. In this role, Gil was responsible for overseeing the performance of every Make-A-Wish chapter in the country.

Previously, Mara served as general counsel to community college and K-12 school districts as well as counsel to the County of San Diego and the San Diego Metropolitan Transit Development Board. Mara serves on the League of California Cities’ Public Records Act Committee and was an editor of the California Municipal Law Handbook.

A long-time community leader, Mara Elliott chairs a committee of the San Diego Lawyers Club working to advance the status of women in the law. A public school parent, Mara is a leader on her son’s local School Site Council. Mara also serves as trustee of the San Diego County Law Library and was recently honored as Advocate of the Year for her work for the National Multiple Sclerosis Society.

The daughter of a Longshoreman father and mother who emigrated from Mexico, Mara Elliott graduated from UC Santa Barbara and University of the Pacific, McGeorge School of Law.

The candidates for District 7 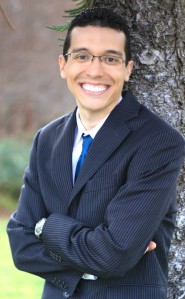 Native born Texan Jose Caballero was accepted to the prestigious Naval Nuclear Power School where he became a nuclear engineer for the United States Navy. He served in the Navy for six years. Four of those years were spent here in San Diego when he was a reactor operator for the USS Ronald Reagan. He did four deployments in the hostile waters of the gulf supporting operations Enduring Freedom and Iraqi Freedom.

Afterwards, Jose went to San Diego State University to receive a degree in Political Science.. He has been a mentor for underprivileged youth and organized multiple cleanups across the city. His most recent achievement was working on the Kevin Beiser for School Board Campaign.

Justin DeCesare is a local businessman and broker in the real estate industry, the President of the Tierrasanta Community Council, the father of two young children, and a 8-year veteran of the United States Navy.

Justin believes that a strong middle class builds a strong regional economy. He is proud of his experiences in the Navy and gladly represents his neighbors in the real estate industry and as President of the Tierrasanta Community Council. He would like to continue that service in the community as the San Diego City Council representative for District 7.

The La Mesa-Foothills Democratic Club is one of the largest and most active chartered Democratic Clubs in San Diego County. Our March meeting will continue our series of candidate forums, local issues and endorsements, and will give everyone a chance to weigh in on the Presidential race. Please visit our website at www.lamesafoothillsdemocraticclub.com for more information and like us on Facebook.